A Walk on the Edge

My favourite assignment is to ask students in my University of Prince Edward Island IST 614 class: “Islandness: Culture, Change and Identity” to take a walk on the edge as part of our discussion around what “the edge” means to islanders. This is generally not a hardship when you live on Prince Edward Island: it usually means a welcome trip to the beach. However, when you ask them to do so in January or February… well… it’s not so much fun. But my students stepped up to the plate, and in wonderful fashion they tell us here what it’s like to walk the edge of Prince Edward Island – on a freezing cold day in early 2017.

And for "Walks on the Edge" from previous years, go to http://projects.upei.ca/mais/. 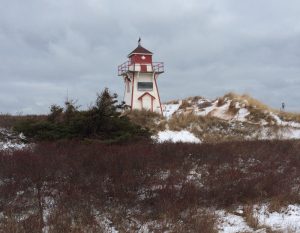 A Walk Along the North Shore Near Covehead Harbour, Jan 22/17
Ian McIsaac

The lighthouse near Covehead Bridge marks the entrance to Covehead Harbour on P.E.I.’s north shore. In the spring and summer especially, this harbour is busy with lobster boats heading in and out daily during May and June checking traps in the shallower waters within a few kilometers of the shore. The summer season is busy with many locals and tourists heading out for a few hours of deep sea fishing. During the summer and early fall there are a number of recreational boaters who use the harbour as well. Due to the constant shifting of the sand, the Island’s north shore harbors are not very often ports of call for sailboats because of the risks of running aground on sand bars.
READ MORE

February in Prince Edward Island is not a time that anyone thinks about going to the beach. I have been to the north shore other years in winter where the wind was howling, and great slabs of ice broken and piled up on the beach. The sea’s presence reflected only in the swell under the ice.

I put a few layers on expecting the worst and drove from Charlottetown to Brackley Beach. It is rare to have a still day on the north shore and today there was not a breath of wind. It was fairly cold, -9C and any wind at all would have made it feel much colder. READ MORE

A Walk Along the Edge
Maureen Pendergast

I live at the edge. I live in Darnley on Prince Edward Island, a few hundred yards from the boundary between land and ocean. The bridge that takes me away, and lets me come home is concrete, but somehow lacy and fragile, when I hear what I think is a plane overhead bound for Europe, or a snow plow a mile away on the highway, and then I realize it’s the tons of sea ice  smashing up against the shore.

I see the end of solid, and the beginning of moving, immutable liquid every morning when I wake up, and every time I come home. It tells me nothing is ever the same. Each day will be different, and sometimes surprising. Whether snowshoeing, plunging through drifts, or driving, I am always oriented to the unreachable line between sea and sky. READ MORE